Today Chris and I are reviewing Stone Brewing Co.’s India Pale Ale.  We’re doing some work on the site and figured we’d double dip with a review of a great beer.  In our ongoing review series we’ll be covering the following 5 items:

Here is a quick guide for the beginner http://indybeers.com/beer-tasting-guide/.

(Note written after my review) – For the record, I have finished my review and I’m waiting on Chris to do his.  He is on is second beer, but won’t come up for air on coding the site.  I may have to take drastic measures soon.

Based out of Scondido, CA they brewed about 115,000 barrels in 2010.  Stone has been brewing beers for about 15 years.  They are happy to offer tours, but they tend to get busy so make sure to call ahead if you plan to visit the brewery.

Scott: A nice classic golden beer with a slight tilt towards dark.  When I poured Chris’ beer I did it too fast and he got a nice size head.  For mine I poured more slowly and got a very easy to manage head on the beer.

Chris: A cloudy, amber colored beer with a fair amount of head. I wasn’t opposed to how Scott poured the beer. While drinking the first beer I noticed the inside of the glass was coated with head based residue.

Scott: You can definitely smell the hops, but it’s not overpowering like some beers.  There is almost a slight citrus smell at the end.

Chris: I have a cold right now so my sniffer is on the fritz. The hops are there but don’t seem too strong.

Scott: Small bubbles, with a lingering feel on the left and right side of the tongue.  The the beer has a slightly heavy feel, like a light syrup thinness.  Overall, very pleasing palate.

Scott: Ah, the meat of the matter.  A very good IPA, although not my favorite.  The flavor is full, but not too heavy.  These will go down easy, but not too quick.  At 6.9% that is probably a good thing.

Chris: Let me preface this section by saying that I’m not a huge fan of IPAs. I find most of them too hoppy with a strong tangy taste, almost bitter. All that said, Stone has done a pretty decent job by not knocking me off the stool. Something in my gut tells me, I really should review this when I don’t have a cold.

Scott: There is an enjoyable hoppy aftertaste that seems to be lingering longer the more I drink.  Very pleasant, and makes me want to drink more.

Chris: For an IPA it seems decent. I have a feeling my cold is masking the hoppiness.

Scott:  I would give this beer a 5/5 overall.  Out here on the East Coast it showed up as $10.99 for a 6 pack, so not an everyday beer, but one that should be enjoyed if you are given the opportunity.

Chris: Score it 3.5/5 for me. My head is pretty loopy right now and not from this 6.9 ABV IPA. Based  on this experience, I would probably try it again. 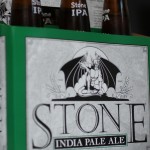 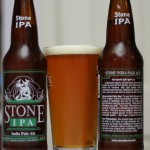