I reported two days ago about how craft beer seems to be recession proof.  Well, the same doesn’t seem to hold true for big beer.

The thing you pick up pretty quickly in just about any discussion of craft beer is that beer people are geeks: obsessive, opinionated, passionate, pedantic human beings who spend hours mulling every drop of their industry.

We discovered this firsthand last week when some folks at the Beer Institute, a beer industry organization based in Washington, pointed out an alternative theory behind our post about how craft beer beat the recession. The Beer Institute found that craft’s gains came at the cost of overall industry losses. As Beer Institute spokesman Chris Thorne put it, “Beer isn’t recession proof.”

“What you had was guys who build roads, hang drywall and deliver appliances out of work. These are guys who drink premium and premium light brands, because it’s affordable and that’s what middle class Americans drink,” Thorne says. “Meanwhile, Wall Street bankers, lobbyists and other well-paid professionals survived the Great Recession just fine, and continued to plunk down big bucks for high-end beer, thereby growing their share of market.”

To illustrate that point, the Beer Institute provided a chart of average unemployment rates compared to average monthly beer shipments during the same period. Overall shipments began decreasing steadily in 2009 and continued through June of last year in direct correspondence with job numbers. 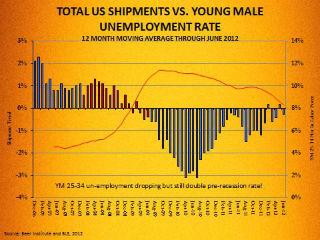 In 2011, the last full year for which numbers were available, the Treasury Department’s Alcohol and Tobacco Tax and Trade Bureau indicated that overall U.S. beer shipments decreased 1.4% after dropping 0.7% in 2010 and 1.9% in 2009. Anheuser-Busch InBev (BUD 0.00%) and MolsonCoors (TAP 0.00%), the nation’s two largest brewers, each saw shipments slip 3%. Heineken shipments also fell 4%.

Results have been mixed. Early indications from industry trade publication Beer Marketer’s Insights show A-B with a 0.6% gain in 2012, thanks to both premium beers and a dwindling unemployment rate. Improved jobless numbers helped boost U.S. shipments 1.5% in 2012, based on preliminary figures, but it hasn’t been an even recovery. Higher-paid college graduates have seen most of the benefits, while those with a high school education or less continue to lose ground. As a result, MolsonCoors’ MillerCoors U.S. division saw shipments drop 1.8% last year as drinkers unsure about buying 30-packs of Miller or Coors in an unstable economy cut back.

Though the Beer Institute asserts that dividing brewers up into different categories only detracts from a thriving industry that boasts more brewers than at any time in U.S. history, beer spending patterns indicate that those fractures have already formed. Beer geeks can use whatever labels they want to describe it, but the only labels that matter are the ones on the beer cans and bottles each side of the unemployment divide can afford.